The U.S. Has Nearly Fulfilled the Communist Manifesto

Posted on April 6, 2016 by Relampago Furioso Leave a comment

America has marketed itself as the world’s bulwark against Communist tyranny for a century. However, it has been quiety moving ever closer to completing the ideals of Marx and Engels as written in their Communist Manifesto.

In response to The New Modern Man article featured on Return of Kings Why Does America Topple Socialist Regimes Abroad While Adopting Their Policies At Home, user spicynujac posted an astute comment. In it, he points out America has already fulfilled 8 of the 10 planks of the Communist Manifesto (minor editing by me to make it easier to read.)

(1) Abolition of private property in land and application of all rents of land to public purpose: In America, one must pay thousands or even TENS of thousands of dollars to the government every year for the right to use their so-called “private property” – property taxes.

(3) Abolition of rights of inheritance: There are estate taxes and indeed the regular system of taxation waters down the ability to inherit property. Sure, I can inherit my parents bank accounts, after the government takes its 30% cut first.

(4) Confiscation of property of all emigrants and rebels: Civil forfeiture, excise taxes, exit taxes, and FATCA. Hell, we have gone a step further and said anyone considered a rebel can legally be killed by our president without ever being charged of a crime.

(5) Centralization of credit in the hands of the state, by means of a national bank with state capital and exclusive monopoly: Check.

(7) Instruments of production owned by the state: The US has adopted the fascist system described in the article above where corporations own the means of production for the benefit of the elite, and the government provides military support and protection.

(8) Equal obligation of all to work: If we had this it would be an IMPROVEMENT!

(9) Abolishment of distinction between town and country: In progress.

(10) Free education for all children in government schools: Check.

So how exactly was it a great thing to “defeat communism” if the above is what our defeat won us? 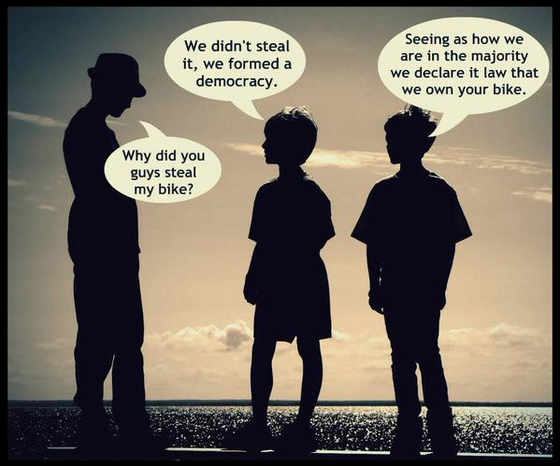 Democracy offers no protection from the majority mob, unlike the republic which does through the rule of law and protection of private property

What’s even worse than democracy is managed democracy, which is really a form of inverted totalitarianism in which the masses of people are managed by deception:

Under managed democracy, the electorate is prevented from having a significant impact on policies adopted by the state’s continuous use of propaganda techniques.

Getting back to the planks of the communist manifesto being implemented in America, in a coming article the story of how the U.S. dramatically overplayed the threat from the Red Menace through the use of propaganda techniques while adopting socialism at home will be detailed.

At the same time America started toppling socialist regimes abroad supposedly because of the Red Menace it was instituting Cultural Marxism at home, first by pushing feminism which would break up the family. Religion and private property have also been under attack, especially the Christian faith which has been relentlessly assailed by liberals. The only major step left in the cultural transformation to a Marxist society is to tear down the remaining symbols of the nation (i.e. those terrible “racist” old white men that founded it.)

The finer details of the rest of the transformation to a Marxist culture are being worked out. Just look at how much of the textbook definition of Cultural Marxism we have also completed:

Cultural Marxism is the gradual process of destroying all traditions, languages, religions, individuality, government, family, law and order in order to re-assemble society in the future as a communist utopia. This utopia will have no notion of gender, traditions, morality, god or even family or the state.

The elevation of homosexuality to the same status as (arguably, even higher status than) heterosexuality has furthered the attack upon the traditional family and traditional morality first begun by feminism. Feminism has rendered women who practice it statistically sterile and provided incentives to reduce males to nothing more than sperm donors and worker bees who have no say in the society or in the lives of their offspring.

The next steps include the removal of the concept of gender, already well underway with cross-dressing men now being allowed into women’s restrooms under the transgender Trojan horse. The attack upon morality will continue with the left slowly elevating pedophilia to the same status as homosexuality. Hints that this will be their next move are already appearing, especially when leftist Slate magazine just ran an article titled I’m a pedophile, but not a monster which attempts to humanize child molesters.

The removal of individuality is well underway with a public school system that allows children less time outdoors than inmates in maximum security prisons. The education system increasingly teaches conformity instead of critical thinking. A new app called Peeple is also being pushed that will allow other people to rate you, which ultimately enforces politically correct behavior. Facebook and its digital paper trail do the same. There are already reports of people being fired for Facebook posts and some employers request access before they will hire a prospective candidate. If you don’t toe the line, you’ll be reported and sanctioned when it comes time for a job interview, promotion, or college admission.

One must also realize the Neoconservatives of today base their philosophy on the teachings of Leo Strauss, who believed the ideals of personal liberty and freedom had failed. His proposal was constructing a new myth of America that would remake the society into a collective that was under the control of the mythmakers.

It is getting very late in the game to win this culture war. However, there are at least a few encouraging signs that people are increasingly waking up, with the destruction of the false narrative bleated by the legacy media as free speech on the internet broke up that racket.

Based on the tenets of the Communist Manifesto and the quantity of items on the Cultural Marxist checklist we have completed, it can be roughly estimated that we have completed 75% to 80% of a socialist revolution in America.

History is replete with turning points in which the world seemed to be moving in one direction until there was an event that sparked sudden and rapid change. Let’s home the pendulum swings back from the specter of global socialism and communism before the reprogramming of minds and opinions is complete.