Meet Trevor, a “chestfeeding” trans-man who removed his breasts but still has a vagina and used it to give birth

Ever hear of a chestfeeding man? That’s a new term coined by a Canadian woman who wanted to become a man, removed her breasts, later realized she still had all the female plumbing when her biological clock started ticking, then got pregnant and decided she wanted to breast… er… chestfeed. Trevor McDonald, 31, never had a hysterectomy or completed the sex change operation even though she presents as a man. Trevor has a gay partner that’s a man, (a gay partner of a partially transitioned man who actually still has a vagina isn’t really gay…right?) so the two conceived and Trevor carried the baby while presenting as a male. Don’t you dare make fun of it or that will make you some sort of “-ist” in the New America.

If your head isn’t swimming after untwisting all that, there’s more. Trevor, biologically a she, but presenting as a man, resents being called a mother.

Throughout the pregnancy, I was able to continue presenting as male. There were people who immediately began calling me ‘mom’ and ‘she.’ MacDonald said. One person said: ‘If you’re giving birth, you’re a mother.’

How primitive of that person to think only women can give birth. Let’s familiarize ourselves with some gender terminology so we can be “enlightened.” Trevor continues:

I was worried that breastfeeding might feel gendered to me – I thought, am I going to be able to do that, or am I going to experience a lot of gender dysphoria.

Gender dysphoria. Haven’t heard that one. A quick search turns helps clear things up for us knuckle-draggers in society. Here’s the definition:

The condition of feeling one’s emotional and psychological identity as male or female to be opposite to one’s biological sex.

Um, okay moving on. Trevor complains about the confusion created when he goes to chestfeed in a men’s restroom.

I’ve felt pressured to nurse in bathrooms because of the supposed lewdness of feeding a baby from my body. I’m also told that my body and gender don’t fit into the neatly divided men’s and women’s restrooms of western society. People like me are told to keep out. I was worried that breastfeeding might feel gendered to me – I thought, am I going to be able to do this?

Before dealing with the problems of chestfeeding in a men’s room, how did Trevor figure out he wanted to get pregnant? It was only after considering adoption he and his partner (biologically a straight couple) had a long talk and figured out they both had the parts to conceive. They timed the conception so Trevor would get his baby bump (wait…is it technically her baby bump?) during the height of winter so as to hide any signs of pregnancy. Trevor continues:

Our next door neighbors did not know that that there had been a pregnancy until we came by with the baby.

Even though Trevor identifies as a man and did not let neighbors know about his pregnancy, he wanted to keep his female anatomy (other than breasts) because his vagina and uterus might come in useful someday.

There is this assumption that goes along with the ‘born in the wrong body’ narrative, that if you are a trans guy you would want a hysterectomy and never use your body to carry a pregnancy.

What man in a woman’s body wouldn’t want to give birth someday? 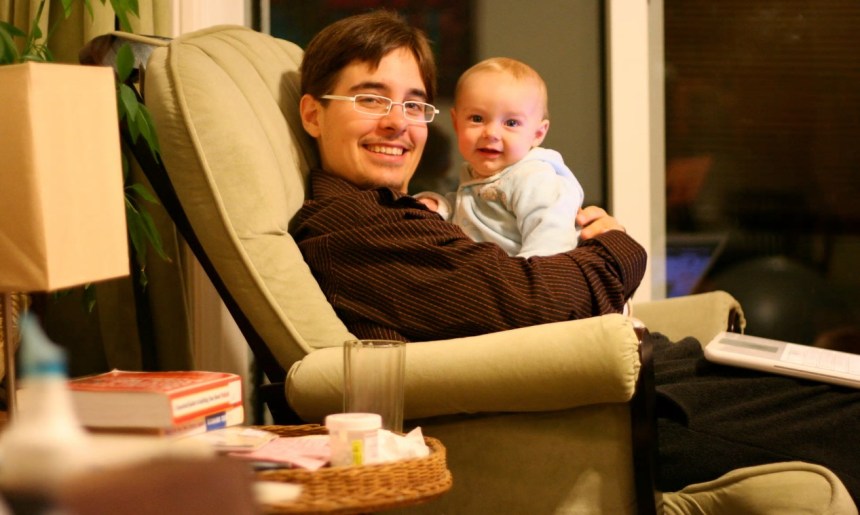 Trevor and the son he gave birth to

Trevor even runs a blog to help highlight the challenges of chestfeeding as a male. He also ran into issues when doctors were confused about his pregnancy.

I had to come out to them as transgender and explain a lot of my backstory in the middle of a hallway alongside other people who were also trying to get past the security desk. That didn’t feel particularly safe.

Ah, those simpletons who still conform to the idea of two genders rather than the 60 or more created by liberalism.

We wish the best of luck to Trevor, and especially his son who has to grow up in this environment. This twisted story helps highlight Anglo-America’s weird sexual and gender issues, issues which are so convoluted they’re hard to understand. Humans are the only species to be confused about gender identity. From the lowly sea urchin to our close cousin the chimpanzee, no other species is confused about male and female, and there is no third gender.

A couple of Disqus commenters seem to have figured out the ruse.

Am I the only one who sees the irony here? She transitions into a man so she can be in a gay relationship? Really can she not see that she is attracted to men because she’s a woman not man in a woman’s body? We have gone completely off the deep end as a society and it’s high time conservatives stop being afraid to call things as they are in the most pointed terms possible!

This saucy reply also gets it.

And her ‘gay’ partner is not really gay. He is just pretending to be because he likes to do it through the back door and his girlfriend likes that too. (No apology for calling a spade a spade.) These are two mentally incapacitated brains sharing the same virus.

A completely broken down culture, represented by this story being pushed as the new normal by the mainstream media, is the end result of decades of sophistry by Cultural Marxists. Sophistry is defined as the use of clever but false arguments, especially with the intention of deceiving. The West has been deceived into believing cultural degeneracy is progress, normalizing mental illness is inclusiveness, and anyone who is in the minority is superior to the majority. A man and a woman performing all these mental and physical and gender gymnastics to ultimately end up reproducing with each other the way men and women always have tells quite a tale about where Western society is at, and where it’s headed.

Where this road ends, nobody knows exactly, but this is only the beginning of trying to reinvent something that has stayed the same for hundreds of millions of years – sex and gender. It can’t end well.