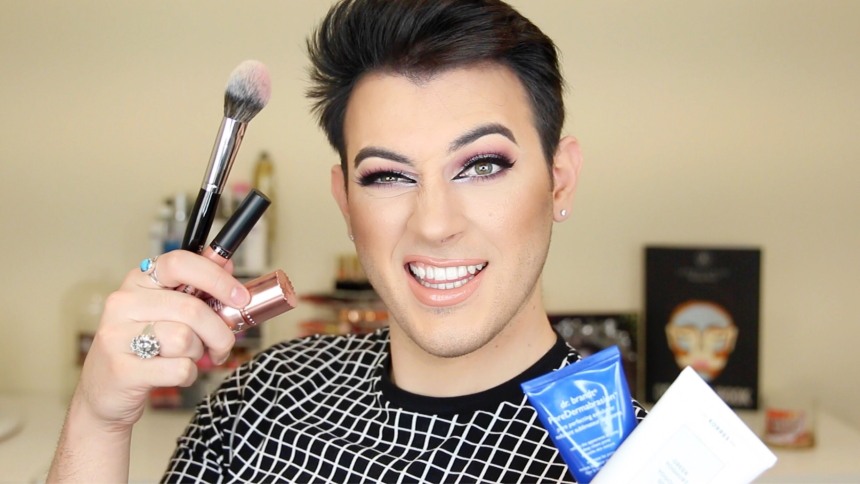 Anglo America continues to sink deeper and deeper into a sexually confused, androgynous quagmire. Unfortunately, it wants to take the rest of the world with it as it sinks. Evil elites (the people who really run the world) seem hell bent on turning every one of us into sexually ambiguous pods who are only allowed to exist as long as we mindlessly consume, consume, consume and obey their wicked commands.

Introducing mass marketed male makeup and telling millions of young boys to wear it is yet another sign something is terribly, terribly wrong with men and the sexes in Anglo America.

It’s also a sign the Cultural Marxism agenda is still rolling ahead at full steam behind the scenes. It’s going to take more than Brexit and a presidential election to stop them.

Manny Gutierrez (pictured above) is becoming Maybelline’s first male makeup ambassador. It seems the globalists want to take direct aim at the last remaining vestiges of masculinity in the Americas as Latinos are now being targeted for assimilation into the sexually confused collective. Gutierrez seems happy with the gender-bending arrangement:

Honestly I couldn’t be more honored [or] thrilled! Thank you to Maybelline for taking a chance on me!

What the actual fuck? At face value, one might wonder who really cares if some boy wants to put on makeup. But the awakened man knows to read between the lines. A large and powerful cosmetics company putting the weight of its organization behind getting your son to cross dress reveals many troubling things going on in the centers of power in the West.

The Maybelline announcement comes on the heels of CoverGirl’s announcement of a new CoverBoy to market their wares to a new generation of young men. Proving the elites’ androgyny agenda is already making inroads into the next generation, their new poster child made this announcement:

Hey guys, my name is James Charles and I’m a 17-year-old makeup artist! Today I am living out one of my biggest dreams and I’m currently on set for my first-ever TV commercial with CoverGirl. That’s right, I am a new CoverGirl.

Yep. A young man is now claiming he’s the new CoverGirl. That’s no less than two companies painting their lipstick on your son.

The party is only getting started with the unveiling of Gutierrez and Charles by the cosmetics industry. I’ve long known Latin America, my refuge from the insanity of Anglo America with its Old World masculinity and femininity would someday be targeted by these people.

Having Gutierrez as the poster child for this new makeup for men agenda reinforces the fact the aim of assimilating Latinos into The Anglo American Matrix is only one check mark on the clip board. The end goal at the bottom of the clip board is neutering the entire population of the world.

Charles only confirms the low level white boys have already fallen to as a result of this agenda.

If the elites/globalists/Satan incarnate realize their goal, forcing the English and Spanish speaking world under the thumb of the gender benders, there’s not much world left for the social engineers to conquer.

The push to completely obliterate sexual dimorphism works like this. Social engineers are taking a two-pronged approach: Penis Envy is pushed by feminists while metrosexual men blur the lines between male and female even further.

Philosophically, destroying the sexes in the name of profit and power is a terrible and confusing end for the Faustian longing for the fulfillment of Western Civilization’s Prime Symbol of infinity, in which the West literally tries to turn human beings into the equivalent of machines to power an infinite growth economy that benefits the 1% at the expense of everyone else’s humanity.

What remains to be seen is what effect (if any) the awakening of the Silenced Majority will have on the androgyny push. Men everywhere need to remember just how truly evil the people who are trying to neuter your son and sew a penis onto your daughter really are. A purge of these people from the levers of control in society is in order.

Hopefully, the upheaval currently going on in America and Europe led by the deplorables is only the beginning of a righteous cleansing of the cultural cancer foisted upon us by those who seek to manage us like human cattle living on a labor and tax farm.