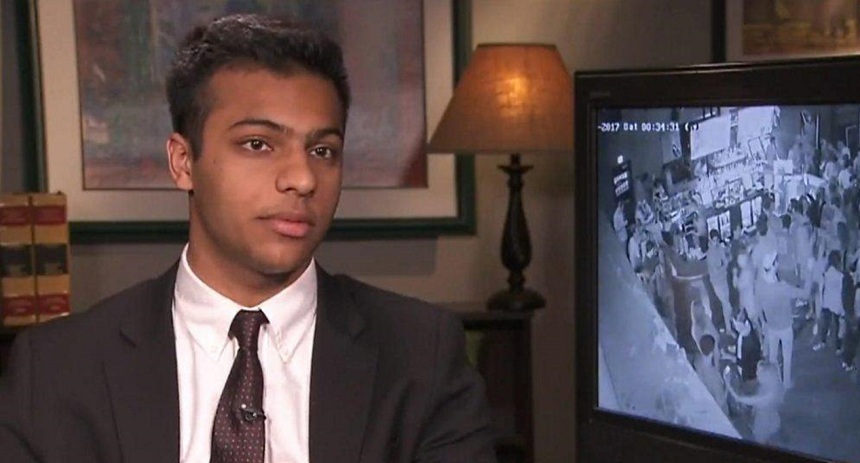 Fake rape claims are becoming an epidemic in a YouGoGrrl America. They’ve become a cheap and effective way to gain social notoriety and attention for unscrupulous women, and a revenge tactic par excellence. Still, other women may destroy what they see as Beta males just to feed the female need for drama. Motives aren’t always clear.

But, the simple fact is, women in Anglo America remain free to destroy a man’s life with impunity just by yelling the sexual equivalent of “Fire!” in a theater. There’s little recourse, as men are immediately outed, their identities drug through the mud as suspect sex offenders while women – even when they make up lies – enjoy the cloak a pussy-worshiping culture provides.

One such case is at least receiving a passing glance from the moronic American media, namely the news/gossip magazine Inside Edition, but only because it pits two protected classes against each other: “perfect” women and “perfect” minorities. If it had been a white guy falsely accused of rape, make no mistake this case would never have gotten the national attention it now has. That bit of wisdom comes from from Yours Truly, someone who worked in news for 15 years, and knows how it operates. In any case, let’s examine the following story to find out what it teaches us about both women and this sick culture.

Before delving into the details of this story involving the dangerous duo of fake rape stories plus female privilege, it needs to be said that making up a fake rape story is all it takes to provoke a gynocentric Police State USA to come down hard on men these days. Why women would never make up a false rape charge, goddesses that they are! At least, that’s the totally insane cultural narrative in Anglo America. That’s literally the way the law is written and enforced in this society.

Statistics, however, show that many rape claims turn out to be false. Let’s chalk another one up under the “fake rape claim” column. This time, on the receiving end of the fury of a woman’s scorn is an Indian-American college student. Milo reports:

Arman Premjee, 20, was accused of sexually assaulting a 19-year-old fellow student in her dorm room after meeting her at a nightclub in Los Angeles on April 1. Security footage, however, showed the girl kissing Premjee, leading him out of the nightclub and making sexual gestures towards him.

It seems the unnamed Anglobitch started acting sexual around Premjee almost as soon as she saw him.

Security footage shows the girl pulling Premjee outside the nightclub before making a sexual gesture to a friend, poking a finger through a circle made with her hand, behind his back.

Yeah, we used to do that “fucking” gesture even back in grade school when I was growing up. So, we know what was on the girl’s mind. Premjee told interviewers:

She put her arms around my neck, she started kissing me.

Sluts gonna be sluts. Unfortunately, this one had the kiss of death in mind.

This case is at least one example of a positive outcome spontaneously arising from the negative position of living in a surveillance state. The injustice system could only verify his claims because Premjee and the ho were both caught on video surveillance.

After sexually assaulting Premjee with impunity, she then lured him into her trap, as predatory females tend to do. Milo writes:

Security footage from the college dorm shows the girl signing Premjee in.

So, she dragged him into her lair. He didn’t force his way into her room, or her eager beaver.

(By the way, making the assertion that the ho sexually assaulted Premjee is important, because this narrative turns the tables to expose yet another cultural bias – if Premjee did to the ho what she did to him…grabbing him, kissing him, making obscene gestures, etc. this is how the story would have played out with the altering eye that alters all in American media.)

The anonymous skank then sprung the trap, lying her ass off as women are famous for. Adding fuel to her newly created fire, she plays The Female Victim Card as part of her crooked hand at the poker table.

The girl told detectives that she had no memory of what happened that night but Premjee disagreed that she couldn’t consent.

She knew what she was doing. She was able to stand on her own two feet. She led the way.

Only surveillance video and the girl’s brazenness saved Premjee’s ass. Also, the previous plot twist lets us know there’s yet another double standard when it comes to sex in Anglo America – a woman can be too drunk to consent to sex, but a man cannot!

The good news is a judge saw through the treachery of this girl after seeing the way she acted in public and on video. The judge in the case said:

I believe there was consent. There is a very strong indication that the alleged victim in this case was the initiator.

The case was dismissed. Still, Premjee could be thrown out of college over the incident.

And the malicious Miss still walks free. Interestingly, and not surprisingly, Inside Edition blotted out the girl’s face in their news report to “protect” the identity of a woman who nearly destroyed a man’s life, reputation, future, and freedom based on a tissue of lies. This is how deep female pedestalization runs in Anglo America.

The stunning act of making a premeditated false rape claim, and lying about it from start to finish proves many of the narratives we discuss in the manosphere about women to be absolutely correct, especially Schopenhauer’s postulations on female dissimulation.

Fake rape claims are far from unusual. There’s also the tragic case of NFL player Brian Banks, who’s life was nearly destroyed by some bitch screaming rape, with her accusations landing him in prison for 5 years before she finally admitted – on Facebook of all places – she made the whole thing up. That’s just one example. There are many others.

What will be done about women being exposed for the lying, deceitful, malevolent individuals many of them are? Nothing. This dying culture still has blinders on. It offers no end to the scorn heaped upon men, sex, and masculinity, but when women are doing dirty deeds, the legal system and the mass public look the other way.