Matt Lauer Taken Down as The Sexual Witch Trials Continue

Leftists burn another of their own at the stake

The Sexual Witch Trials are reaching a fever pitch in culturally insane Anglo America. Playground bullies and sycophants to the elite in the mainstream media continue to be hellbent on stigmatizing heterosexuality and masculinity at any cost. It matters not whether the hyenas take down one of their own in their mad pursuit of a scoop. Social engineering is priority one to these fellow travelers.

Matt Lauer of Today show fame is the latest victim of this mass hysteria. In researching the matter, Lauer’s “offenses” include asking (not telling) a woman to take off her blouse in his office. She accepted. He took his junk out. They fucked. She kept quiet until sex scandals became the topic du jour, and an easy way for predatory females to extract money from wealthy men like Lauer and his employer. Other “offenses” include brushing up against women in elevators and asking if they ever fooled around on their husbands. He also sent some dirty texts. You can bet these hussies enjoyed every minute of it, being seduced by a wealthy, high profile man.

Never is the question asked: Who gives a fuck? It’s just sex! Get a hold of yourself people. Dammit.

But, in the frightful world we are entering, all women have to do is make a claim that they felt “uncomfortable” by the wave of tingles a man’s pass brought on. Worse, women can make this claim at any point in the future. The precedent has already been set. A man admits they had a sexual encounter. And boom, his funeral pyre is lit.

Make no mistake, as delicious as it is to watch leftists hoisted by their own petard, conservatives should be cautious before celebrating. Feminists are winning in that all it takes for a man to have his life, name, and finances destroyed is a harassment claim. No evidence. Just a claim.

The main issue with all these scandals? There’s no due process. It’s just one witch trial after another. Lauer may be an asshole, but are his accusers truly the sexless goddesses they make themselves out to be? Pure as the winter snow and as innocent as nuns? Probably not. We know how Anglo women use their sexuality as a weapon. It’s more likely his accusers are opportunists, protected by the cloak of so-called victimhood.

What happens if we continue down this path of sexual witch trials? It won’t be too long before it’s too dangerous for men to deal with women at all. That seems to be the true intent of all these high profile scandals. To make men part of a lower caste in the corporate world, and lift women to perfect goddess status. To create a world of masters and slaves in which women are the masters. 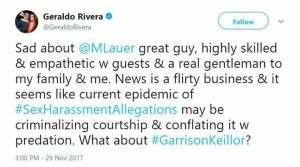 Interestingly, Geraldo is one of the only voices of reason about MSM witch trials

Men already have no reproductive rights or access to their own children because of corrupt family courts. They can be enslaved for 18+ years on a woman’s whim. Now, simply making a pass at a woman or having consensual sex with her (as in the case of Lauer) is grounds for a man’s life to be destroyed if, at anytime in the future she decides to call in to the HR department at GloboWorldCorp.

Notice, there are no criminal charges against Lauer. The accusations against him are for incidents which happened several years ago. For all we know, the women making the accusation wanted to jump his bones. There’s no context provided, except the predictable “evil man” and “holy woman” narratives Anglo media are rotten with.

Who will be the next man to be burned at the stake?

P.S. Have you noticed, all the men being burned at the stake are white men? Racial Bolshevism at work. Obviously, gelding men in the workplace also jives with the Androgyny Agenda.