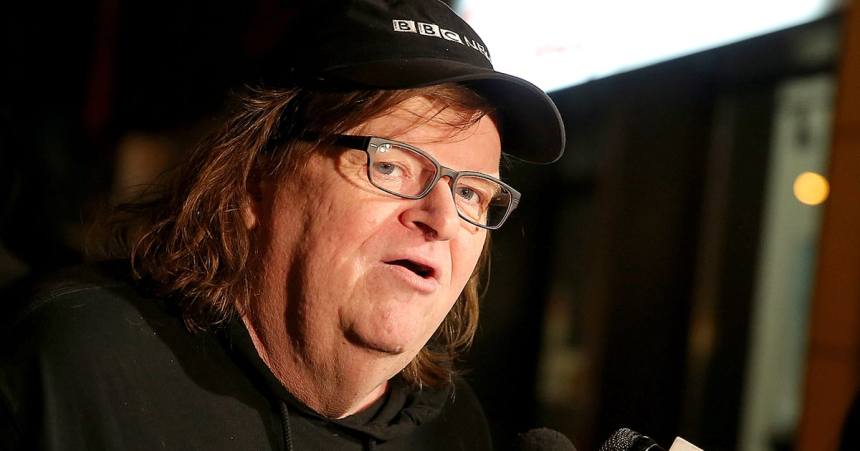 Racial Bolshevism, or the scapegoating of whites (especially white men) for everything wrong with the world is becoming a nastier by the year. As an integral part of The American Socialist Revolution, white men are targeted in an increasingly racist fashion by those claiming to decry racism.

Case in point: The fatso who produced Sicko and other far-left films, Michael Moore, recently lambasted white men in a tirade given at the so-called People’s State of the Union address. Moore called for nothing short of white genocide. He told the crowd:

The angry white guy is dying out, and the Census Bureau has already told us that by 2050, white people are going to be the minority, and I’m not sad to say I can’t wait for that day to happen. I hope I live long enough to see it because it will be a better country.

In addition to Moore’s self-stated bigotry and self-hatred, Infowars reports:

Far-left film maker Michael Moore called for America to be “cleansed” of its “white male privilege” during a speech in New York last night.

Make no mistake, this is a rallying cry for ethnic cleansing.

Asserting that the removal of Donald Trump and Mike Pence from office, “Still won’t be enough,” Moore said, “We must remove and replace the system and the culture that gave us Trump in the first place.”

These are dangerous words. Moore is calling for the destruction of the American republic and its replacement with a totalitarian, Socialist system. Fatso went on to lambast President Trump:

“He did not just fall out of the sky and land in Queens,” Moore continued.” He is a result….of us never correcting the three original sins of America – a nation founded on genocide, built on the backs of slaves and maintained through the subjugation of women to second class citizenship and economic disempowerment.”

As liberal narratives are hollowed out by the cleansing truth of Realtalk and logic unleashed by men like us on the Internet and in the society at large, leftists become even more desperate, shrill and strident in their tones. Moore is evidence of leftists losing their grasp on the minds of the American populace, a privilege they enjoyed for 50 years until the destruction of the centralized mass communication model, i.e. the exposure of the mainstream mierda and Hollyweird as agents of far-left politics.

Of course, the washed-up filmmaker never acknowledges he lives like the 1% he condemns, is reportedly worth $50 million, and recently sold a house he owned but lost in frivorce proceedings for a cool $5 million. (Of course, being forced to sell his house to pay off an Anglobitch in divorce court makes Moore’s “women are second-class citizens” claim all the more laughable). His “second class citizen” wife banned him from living there after she cleaned him out in divorce court. (We won’t even go into the fact Moore’s frivorce once again proves both our claims about the predatory nature of women and that marriage is indeed legalized prostitution.)

Breitbart reported the hypocritical Moore (gravy) owns 8 additional residences. This is hardly a man who’s “Down with the People” as Moore portrays himself.

Let he who is without sin cast the first stone, Mike. In this case, you are the privileged white male you claim to hate. Why not begin by stoning yourself to death rather than casting stones at the rest of us?