Literary figure Faust waged his soul for limitless knowledge – and ended up a slave. This is a nearly perfect allegory for the rise and fall of Western civilization

It’s no secret the white race is dying off. The U.S. is nearly conquered demographically and Europe will be Muslim by the turn of the century. Those of European descent are not only demographically moribund but also spiritually dead and devoid of survival instincts. But, why is it all ending this way? On the deepest philosophical level, it’s because those of European descent have created a machine culture that has separated them from their life-giving biology. Their tragic fate should serve as a warning to other ethnic groups who might be assimilated into this machine culture.

The description of this tragedy playing out before our eyes has literary roots stretching back 500 years. German philosopher and historian Oswald Spengler equated Western civilization’s current plight with that of German literary figure Faust.

Faust is an erudite who is highly successful yet dissatisfied with his life, which leads him to make a pact with the Devil, exchanging his soul for unlimited knowledge and worldly pleasures. After an attempt to take his own life, he calls on the Devil for further knowledge and magic powers with which to indulge all the pleasure and knowledge of the world.

In response, the Devil’s representative, Mephistopheles, appears. He makes a bargain with Faust: Mephistopheles will serve Faust with his magic powers for a set number of years, but at the end of the term, the Devil will claim Faust’s soul, and Faust will be eternally enslaved.

Faust is the perfect allegory for the 1,000 year arc of modern Western civilization beginning with the Renaissance and ending with the machine culture it has spawned. Indeed, the quest for limitless knowledge is ending with mankind being enslaved to machines of its own design. And soon, an electronic prison planet will be the result of this opening of Pandora’s Box. The machine culture is not only set to enslave its creators but kill them as they dedicate their entire lives to it in complete abandon of their biology.

As Spengler predicted a century ago: Civilization has itself become a machine that does, or tries to do, everything in a mechanical fashion. Is that not the perfect description of the modern Anglosphere, the most eccentric (and bereft of Kultur) offshoot of a larger Western civilization? Westerners behave like happiness machines, scuttling off to work in the morning, spending their earnings after work, then sleeping at night. (President Hoover coined the term happiness machines.) TNMM calls this mechanical behavior the sleep-work-spend cycle. Intuitive, life-giving behaviors now escape them. The electronic machines they trust to give them news and information tell them this is the best way for them to live.

The sleep-work-spend cycle can be thought of as a three-pronged gear, which the elite try to make spin ever-faster. The ultimate goal is creating a people-powered perpetual motion economic machine with ever-increasing profits and standards of living. (And, make no mistake, ever-increasing top-down micromanagement as elites position themselves at the levers of control.) But, nothing increases forever. What goes up must come down. There’s already a rupture in the bowels of the engine. 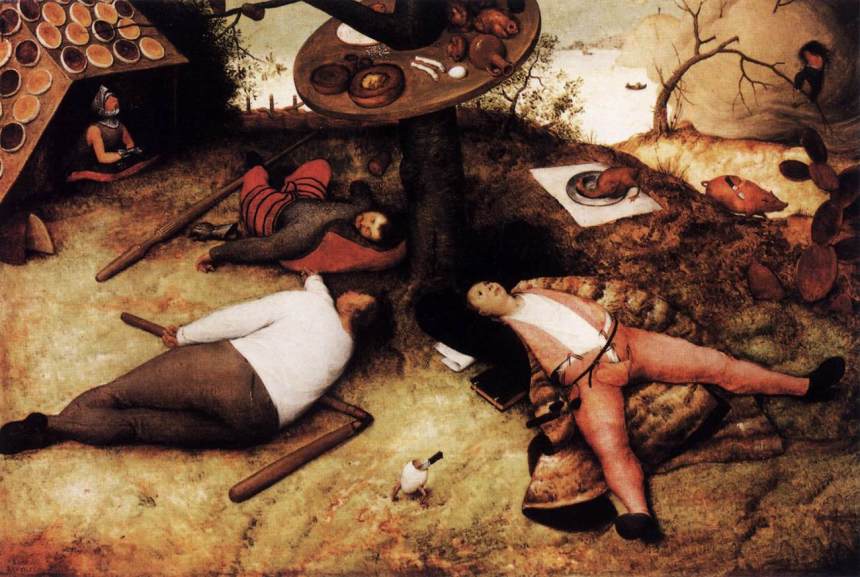 The Creature Rising Up Against Its Creator

The Faustian machine is destroying the biological lives of its inhabitants. The engine is leaking blood. It needs more and more to keep from seizing up. Human sacrifice pays dividends up to a certain point, then it becomes destructive to the collective. The illusion of prosperity is being paid for with the lives of individuals and those of an entire ethnic group.

Anything not mechanical is now a target. Religion, spirituality, and tradition are mocked. Art is now non-intuitive dreck. Fertility has declined. The diversity cult destroys true diversity of thought and behavior as it seeks to proselytize all, making them also worship the Faustian machine. Sexual dimorphism is ending as the genders are merged into one androgynous worker drone. People must live like machines in order to realize the promise of the Socialist Utopia. Humanity’s biology must be destroyed.

We’re told happiness comes from consumer purchases and never-ending upgrades. From sacrificing one’s life – and biological instincts – so the machine might go on. An example of the sacrifices: Rather than seeking dirty sex, ample processed food simulates pleasure along the same neural pathways. It all helps build a better machine.

But, the bloodthirstiness of the Faustian machine can never be quenched. Time for family and friends, or contemplation of life only creates slack in the machine. Every aspect of human life must be sold out. Even if creating problems to create profit is now based on totally false pretenses. Lies are everywhere.

Workweeks continue to expand, more and more of childhood is sacrificed, and families have now disbanded. And soon, even that won’t be enough as the Faustian machine spins out of control. The last vestiges of family, all traditions, languages, religions, individuality, and government, must be sacrificed to forge an even stronger cog. (Cultural Marxism, defined.)

Totalitarian control must be established with a global panopticon constantly surveilling the inner workings of the machine. Cameras need to be placed everywhere. People’s conversations need to be monitored. Their behavior micromanaged. Electronic tracking implants will help move man away from biology and towards the “perfection” of the machine. The machine will work better if future pistons are forged without pesky mothers, fathers and primitive viviparous reproduction getting in the way of the State’s mechanical objectives. All in sacrifice for the goal of creating a Socialist world, a mechanical world envisioned by fictional CEO Arthur Jensen:

And our children will live, Mr. Beale, to see that perfect world in which there’s no war or famine, oppression or brutality – one vast and ecumenical holding company, for whom all men will work to serve a common profit, in which all men will hold a share of stock, all necessities provided, all anxieties tranquilized, all boredom amused.

A world in which freedom and self-determination are ideas of the past. Where there is no individual. Only the collective. And the machine. This is what Faustian machine culture seeks to create. This is the tragedy unfolding before our eyes. From Spengler’s Man and Technics:

Every high culture is a tragedy. The history of mankind as a whole is tragic. But the sacrilege and the catastrophe of the Faustian man are greater than all the others, greater than anything Aeschylus or Shakespeare ever imagined. The creature is rising up against its creator.

The creature is now destroying its creator, Faust. But the creator still believes he can attain perpetual prosperity with the creature.

His illusions of boundless infinity still delude him.

Meantime, life has become a problem to be solved rather than something to be lived by virtue of living in a machine culture. When people live like this they become miserable. Symptoms of the malaise are everywhere. Drug consumption has skyrocketed to the point Anglo culture is now deadlier annually than the entirety of the Vietnam War and terrorism combined. Anything will do so man’s dying biology can be numbed. Obese Americans in particular have become gluttonous sloths resembling Breugel’s painting the Land of Cockaigne. Some men plot escape from the machine before it consumes them. Most don’t even realize the danger they’re in.

While everyone’s attention is focused like a laser on constructing a perfect human-powered machine, nobody notices its creators are dying. The machine is now claiming its first victims. Oh, and beware those who are coming in to replace the dying creators of the machine. Those ethnic groups who are lured towards the illusion of prosperity promised by Faustian machine culture, like moths to a flame will suffer the same fate as the machine’s creators.

It turns out, the promise of the machine culture was indeed all an illusion. The West’s success ultimately came as a result of its metaphorical deal with the devil. Man sacrificed himself in vain in his quest to dominate nature and turn himself into one of his machines. His machines are destroying him and he refuses to let go. Rather than trying to live with nature, he waged war on it.

Will this be the post-mortem for the human species following the age of globalization? A world in which there’s now no place to run to, and nowhere to hide from the Faustian machine, a world encompassing all from the biggest earth movers to the smallest micro-circuitry.