The Coming Cultural Singularity is Claiming Its First Victims 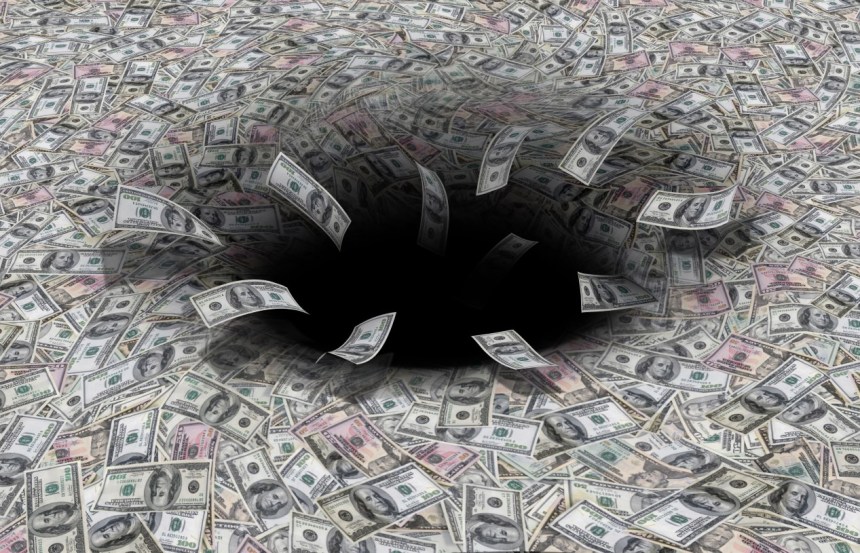 A perpetual growth, consumption economy is like a black hole that sucks the culture and eventually lives of those participating in it right out of a nation – if profit-seeking behavior is unrestrained

You will become one with the Borg. Your existence as it has been is over. From this time forward, you will service us.

Those words are more than just a great piece of writing in the Star Trek: The Next Generation television series. They’ve become a chilling warning to the rest of the world (those who would dare to wish to see their culture remain intact) as a twisted game is now in play to see if CEOs can take American-style corporatism worldwide, with the end goal being the transformation of human beings into Adam Curtis style happiness machines. A game of world domination is now in play, in which humanity takes a back seat to quarterly profit seeking.

Make no mistake, the ambition of globalists and government bureaucrats alike is not only to micromanage the neo-tyranny known as the United States, but to push a culture of shopping, eating out, and creating problems with people’s lives to create profit on the rest of the world.

Nothing is too sacred to be sold out. This makes perfect business sense, but as Carl Sagan once said, the unrestrained pursuit of profit poses serious risks to the soul of a nation. America lost its soul at the alter of consumerism, which is why in the 21st century it is a nation that is materially rich but spiritually and demographically dead (at least for the founding ethnic group.)

After having spent a long period outside the consumption culture, coming back to visit a nation that revolves around getting and spending money at the cost of everything else that once made life worth living comes as quite a culture shock. What also comes as quite a shock is how isolated and detached from one another people are. The country is a coast to coast shopping mall and eatery in which there’s no sense of community and people have no sense of attachment to one another or need for one another beyond fiduciary concerns.

People live debased lives and further debase themselves as they become nameless, faceless strangers in the city. They become automatons who only think in terms of money and how to get and spend more of it. The idea of having children and propagating a culture in which people feel like life is innately satisfying to live has been lost.

Considering this general feeling of the culture one experiences once when he has been away for a while then comes back to a jarring juxtaposition of the Old World with the Consumer World, once coming to this realization a man does not wonder why the once mighty white race is going out with a whimper instead of a bang as it has been sedated and sold out by its own decadence, and individuals’ detachment from one another.

The demographic and cultural decline of Anglos in America also serves as doleful warning to those who would sell out their culture to live mechanical lives as profit seeking consumers in a consumption machine: selling out your humanity for “stuff” and fleeting material pleasure comes as a high price.

Is there anything that can be done?

One does not simply stop the wheels of an economy that have mercilessly decimated the nuclear family without facing serious repercussions as people have evolved to depend on it, but those who organized the world’s first consumption culture will be perhaps the first to disappear from the face of the earth as a result of it. Whites are now disappearing from the nation they created in astonishing numbers, and with an ever-increasing pace. It’s what demographers call an inverted population pyramid. Indeed, more whites are now dying than being born. Breitbart lays bare the results of a culture in love with material things rather than people. (As The New Modern Man constantly points out, feminism and Cultural Marxism – both products of monetary powers coming to dominate the political forms of the nation – haven’t helped, either.)

Racial and ethic minorities children under the age of five are now the majority as non-Hispanic white children make up an ever-smaller slice of the population, according to the Census Bureau. New population estimates released Thursday reveal a striking shift in the composition of America’s population as racial and ethnic minority births are also outpacing minority deaths. Meanwhile non-Hispanic whites are experiencing negative population growth, seeing 61,841 more deaths than births between 2013 and 2014. 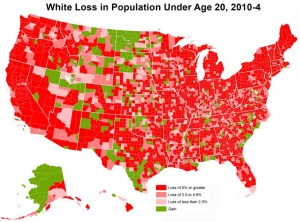 See any red or pink on that map? All areas shaded those colors are where whites are losing population

Whites have a feeling something is wrong, but they haven’t quite diagnosed the problem yet. They see themselves becoming strangers in their own land, they see themselves being demographically and culturally conquered although semi-peacefully, and they know more whites are dying than being born as small towns wither away while they’re simultaneously seeing white population decline in the big city.

Everywhere you go, whites are fading because of the “advanced” and so-called “modern” lives they lead.

There is a growing sentiment of finality and dread that’s almost palpable. Comedian Bill Hicks even hints at the problem, although his voice is quickly drowned out by constant advertising and product placement.

I do not believe making money in order to consume goods is mankind’s sole purpose on this planet.

If only people realized their materialism is literally killing their posterity and consuming their lives in the pursuit of vanity and narcissism. 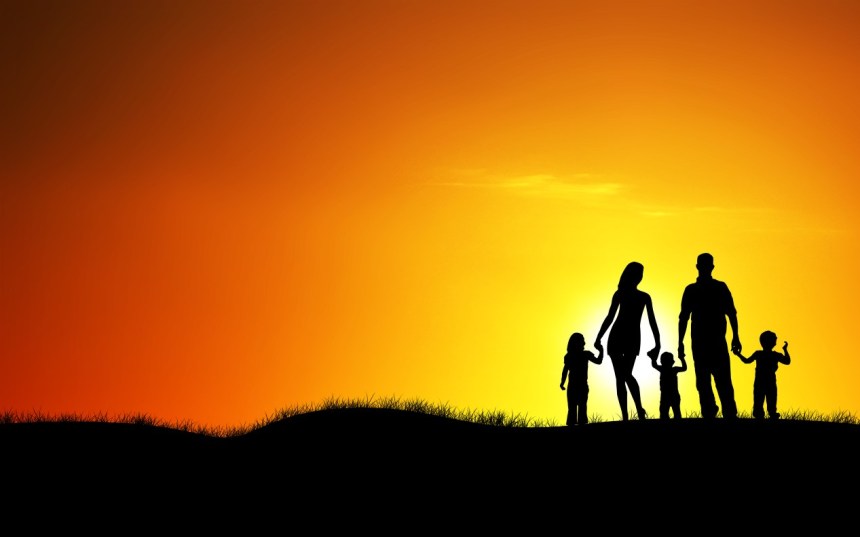 What is causing all this? It must be those immigrants is the initial thought. It’s not that. It’s the fact the cycle of life, i.e. having kids and raising them as the motivating force behind life rather than having careerism and consumerism as the motivating force has gone the way of the dinosaurs. That “antiquated” way of living life has been disrupted by gold-plated dreams of winning the conspicuous consumption prize when in fact the reality of any economy is there are 10 losers for every winner or else it could not function.

The family, the building block of any society or economy has been forgotten. A new electronic gadget or sedan has taken its place.

There are those who want to see the American model of consumption and the sacrificing of the world’s cultures at the altar of the shopping mall foisted upon everyone on the planet. The beast that is the perpetual growth economy that has been created must constantly be fed with a steady diet of human lives and human energy. It won’t stop with its voracious appetite until it has turned the entire world into the same perfect consumers Americans have become.

If it doesn’t, the coming cultural singularity will mean the entire world, not just America, is one big shopping mall and eatery. I can think of no worse hell than a planet in which humanity has taken a back seat to corporate economics, and everyone goes into work 50 to 60 hours a week in a rent-seeking economy that consumes their entire lives, their culture, and their freedom. Standardized human beings,in which every tribe and ethnicity talks, walks, and acts just like Americans do today. An entire world just as bland as standardized hamburgers like the Big Mac.

Are you ready to become one with the Borg?